Home › Blog › From the Road to the Trail: Tips for Motorcyclists Trying Dirt Bikes 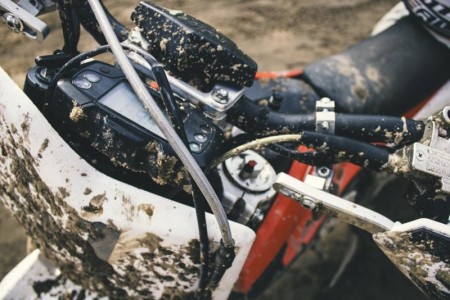 Motorcyclists looking to diversify their ride by trying out dirt bikes face several challenges when transitioning from paved roads to rough, unpredictable terrain. Before they can take to the trails safely and confidently, riders with little or no experience making very tight turns or handling a bike on loose, uneven ground need to learn a few new skills. Here are helpful tips for motorcyclists just getting started with dirt bikes.

By and large, dirt bikes are much smaller, lighter, and more flexible than traditional motorcycles designed for pavement. They're also more responsive and, for better or worse, provide immediate feedback to the rider from the environment. Getting used to a dirt bike's touchier, more loose handling is the biggest hurdle for riders accustomed to being on paved roads, so it's important to note the big and small differences between bike types early on.

Slow Down and Brake Properly

Dirt-bike newbies learn quickly that there are many instances where slow-and-steady is the safe way to go. Even the most hard-packed dirt trails offer far less traction than paved roads, so reducing speed often can prevent sliding and mitigate the dangers of especially slippery patches on a trail. Additionally, braking should be done while completely upright, and more pressure should be applied to rear brakes in order to maintain as much control as possible in the front.

Be Prepared to Stand

Traditional motorcyclists would never dream of standing up while on the road—not the case with dirt bikes. When encountering very rough off-road terrain, standing up out of the saddle allows a rider's legs to absorb extra shock more effectively. Standing also lets the dirt bike and rider move independently of each other, which means more responsive maneuvering and overall flexibility.

New motorcyclists learning to ride figure out early on where to focus their eyes on the road. Since off-road terrain is so inconsistent, it's important on a dirt bike to keep a close eye on the trail ahead. Watch for especially sandy, wet, or gravelly patches, and choose a line that offers as much traction and consistency as possible.

Town & Country Sports Center is the Cement City area's premier motorcycle and powersports dealer. Learn more about the products and services we offer by contacting us online or calling 517-236-7203.